My fellow wizards, adventuring-frontiersmen, and priests of suitable repute - we have gathered here today in this dubious saloon to cogitate.  To place together our mighty brains, and come up with a solution, a path, a strategy to confront that which is ailing our beloved Wampus Country.

As you all well know, for several years now, fell things have been on the rise.

Nine years past, the deviltry of Hell and its cruel representatives here - that nefarious association known as the Web - attempted to secure the so-called Egg of the Phoenix.  Thankfully, they were foiled. [1]

Eight years ago, the archdevil Fyvee invaded our realm with his retinue of fashionably evil spawn.  Praise the petty gods, he was mostly repulsed. [2]

Since that time, we have not been so lucky.  The unearthing of the Eye of the Leviathan has brought woe to the land.  Evil stirs.  Dark shadows grow long - and bold.  Chaotic creatures not seen since cave paintings gallop across the land.  [3]

In Snollygoster Swamp, the pig-men beat war drums and sing the songs of their god, Porcus.  They have been so bold as to murder and kidnap some of the elders of the frog folk.  [4] There are rumors that even now, they capture and tame snollygosters as beasts of war, awaiting a signal from beyond.

North, in the Snowdeeps, civil war continues among the giant tribes.  That ongoing conflict has occasionally spilled into our own green lands, with destruction in its wake. [5]

Our sources in the east report an army, gathered across the desert, has marched nearly to the edge of the Badlands, and may soon be upon us in Thistlemarch and River-Town, if it so wishes.  At the head of this army, they say, stands a mysterious dark magician. [6]

And now, the seers and augurists paint a bleak picture.  Many of them see the same sorts of images - a war in the heavens, a black blade, a feathered serpent.  We do not yet know what it means.  But we must presume we are on the brink of a very dark age here in Wampus Country. 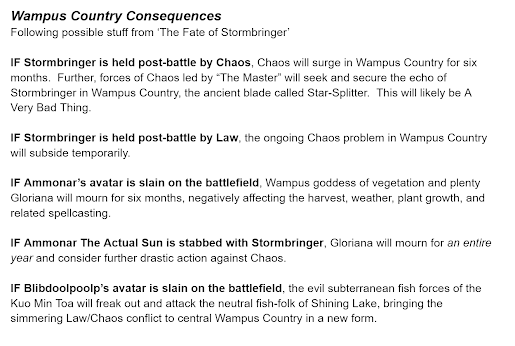 1.  It's true, in 2013 the Rat-House Bastards and some allies played through an adaptation of the module Egg of the Phoenix.  The artifact itself was given to witches for disposal.  Where it now sits...no PCs know.

2. It's true!  In 2014 an archdevil and his warbands pierced the Midnight Sea and arrived in Wampus Country.  Thankfully only a handful of tieflings survived the incursion and subsequent battles.

3. Also true.  The Company of the Black Pearl marched around Wampus Country with an artifact that increased and attracted Evil Stuff for several years.  Lots of goat-men on the rise, and chaotic minotaurs to boot.  Rumblings about a dark Hoofed God.

4. Super true.  Happened during a Wampus Country session run at Hoffcon; luckily the PCs managed to rescue the frogfolk priestess Big Mama Mumu from the clutches of the porcs.

5. Certainly true.  The Critter Gitters in 2021 dealt with some of the fallout of a giant power struggle caused by something the Rat-House Bastards did in 2012.

6. Truly true.  The Critter Gitters watched the beginnings of this army form over a year ago but did not intercede at the time.