Andrew over at Fictive Fantasies has released Crumbling Epoch, which takes a stripped-down variant of B/X and does some interesting things with it.  Full disclosure: Andrew included some reskinned spells from the Wampus Country Arcane Abecediary in this bad boy, so I'm less than objective.  The game's pitch follows in italics:

The gods have left, magic has been reinvented when the old powers burned out, and humanity has survived multiple extinction-level events. There are five classes, including humans touched by the divine, and weak-blooded vampires called Thirsters. Fighters can focus on weapons and armor, or reflexes and style. Wizards use their life energy to fuel their potent magic. Anyone can use armor and weapons in this dangerous world.

This simple game has 12 pages of rules, and the rest is support. There are no attributes, one saving throw roll, and damage-reducing armor–a whole new flavor. Here you will find all you need to run a dungeon crawl without a DM, all on a 2 page spread, for 2 settings! Quick-start tools for a campaign world include a region generator, a religion generator, and a unique monster builder. Several examples of play help grasp the new rhythm of the rules. Finally, each class in the book comes with a Pocket Mod character sheet, so a quick-start game has sheets for the players with rule summaries and class-specific information!

Other fine writers contributed to this game. The appendices include three classes to allow play in Jack Shear’s Devilmount, along with his essay explaining Lumpen-Ones. An adapted spellbook from Wampus Country, based on Erik Jensen’s work, expands what spells wizards can find. 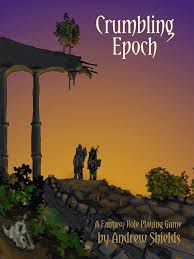 Crumbling Epoch is several things at once.  First, it's a game system that resembles B/X but isn't B/X by a long shot.  Andrew has made some fairly major changes in this area - primarily to combat, which feels more like Tunnels & Trolls in some ways by abstracting an exchange into an opposed roll, and armor soaks damage instead of helping you avoid it.  Saving throws always have a roll-under target of your level plus four, but the size of the die changes based on the difficulty of the threat.  There is a basic skill system, and a surprising amount of detail on encumbrance and stealth.  I knew Andrew was working on a "stripped" B/X, and here it looks like he ran with some very different ideas as far as the underlying engines of the game.  However, everything in Crumbling Epoch is set up so you can use it effortlessly with classic D&D adventures without conversion (or at least, anything beyond on-the-fly adjustments).  The entire ruleset is only a dozen pages and covers a lot of ground, including converting D&D monsters to CE.

The book is also an implicit setting - well, two, really.  Crumbling Epoch features a dying-earth type setting, but we don't have pages of prose or history.  Instead, the setting is reflected throughout the rules in the available classes (which include a vampire-type and a martial artist), the language list (which gives us an idea of the kinds of creatures around these parts), and so forth.  Reading the rules for special weapons, we can see that this world has blackpowder firearms.  There is also an appendix which covers using Crumbling Epoch to run Jack Shear's Devilmount megadungeon, complete with CE rules for the races featured in that setting and some new tidbits from Jack.

Hidden gems lie in the appendices to Crumbling Epoch (and I'm not just saying that because that's where the Wampus spells are).  You'll find some nice table-systems for generating a geographic region and the quirks of a religion here, both of which are nonmechanical and system-agnostic.  Then come the adventures, which are difficult to describe.  Andrew fits each into two pages, describing an entire adventure area, its denizens (including their stats and a line of hit points to use if you need to), and more.  The two adventure areas given (Warren of the Murder Diggers, and Death On Ice) are more like cheat-sheets for crafting your own adventure based on the 'zone' Andrew has created; these are followed by an example using the Warren and a map to gin up a night's worth of excitement.  It is specifically suggested that these adventure layouts can be used for solo or GM-less adventuring as well, and they'd make good Mythic Emulator fodder for sure.

Andrew follows this up with a monster generator, an alternate skill system, and the aforementioned redone Wampus spells (all told, there are a lot of spells in this thing - and I should note that this appendix has all the spells reskinned/rethemed to suit the Crumbling Epoch setting).  Then, to put it over the top, the final appendices are a lengthy example of running CE combat, and the entire CE rules in pocketmod format for you to print and fold.  Very cool.

All in all, there's a lot of content in Crumbling Epoch.  Inveterate rules-tinkerers will enjoy the included variants for their own sake; others may like the implicit setting or the supplemental Devilmount material.  For my part, I'm intrigued by the adventure formatting in CE - I think I could grab either of these and riff an entire night's session pretty easily.  And there's more in the works for the game as we speak.

Check out Crumbling Epoch and Andrew's other work (there's a ton of it!) over at Fictive Fantasies.