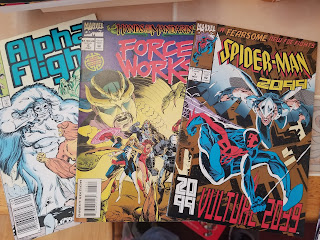 I often shake my head at the idea of buying a big rpg book - ostensibly full of adventure - and not using it for anything.  People do it; I've done it.  It's awful.  We should stop wasting our money.

Rather than dropping fifty bucks on the latest committee monstrosity, consider a smaller investment with potentially greater payoff.  A couple bucks' worth of old comic books might give you more neat ideas to mine than you'd find in some rpg products.

Today at the Ollie's Discount shop, I dropped five bucks on a grab-bag of five comics.  Three of them were pre-2000, pictured above.  There is stuff worth stealing in here - let's take a look and see what kind of loot we can find in here!

Alpha Flight.  There's a b-plot about Sub-Mariner and Marrina, but the main story here deals with the horrible demon-thing Pestilence, which has stolen the life-force of Snowbird's newborn child and is now using his "death and decay" powers to wreck Alpha Flight.  The Great Beasts - maybe the best part of Alpha Flight backstory - make an appearance here, so I'm already a fan.  Shaman gives us some exposition about how he brought Snowbird here, to this place of power, to have her (magical, probably shapeshifter) baby so that he (the wizard of the group) could anchor that superbaby to our reality.  It all went awry, of course.

LOOT:  Very Pregnant Woman with Magical Baby needs to be escorted to a mystical place of power before she delivers.  I've seen escort quests before in rpgs, but never one like that.  You could absolutely steal this gimmick.

Force Works.   This is Iron Man's 1990s team (so extreme!).  This ish is part of multi-title crossover shenanigans in which the Mandarin, who has replaced his hands with actual dragon claws, gets his revenge by capturing Iron Man and War Machine.  It's not a great issue (despite being early Abnett/Lanning), but there are a couple interesting things in here.

LOOT: Century is an alien member of Force Works with whom you may not be familiar, but his entire gimmick is that he's an artificial being who has the thoughts and memories of the last hundred members of his dying species living on within his head.  That concept - packing the brainscapes of a hundred people into one to preserve a species - is worth stealing.  You could do it with a lost tribe of dwarves or elves, or have that lich you've been working on be the repository for her entire lost culture.  What sort of powers might that give you?  If you have the memories of a dozen spellcasters...?

LOOT: The Mandarin has replaced his severed hands with the claws of a dragon (I presume one of the alien Makluan dragons tied to his rings).  A villain with dragon claws, or a demon's hand or something, grafted on could be very cool.  Or you could do it with a hero or an authority figure - the baron's been acting weird and won't take off his gloves (because he lost a hand in that battle last month and now has a devil's claw there instead).

LOOT: In this comic the Mandarin's castle has a spell around it that causes technology to fail.  We already have anti-magic shells and zones in D&D, this might be a fun variant if it's campaign-appropriate.  This could be an inherent effect around places of great preternatural magic, perhaps.  Walk too far into the woods and into the faerie zone and your flintlock just plain

LOOT:  One of the Mandarin's superpowered agents is called Butterfly, and bad things happen to those upon whom she casts her shadow.  In this issue it seems like it's all techno-misfunction hexes, but you could do it as a general curse thing.  Standing in the hag's shadow curses you...that's pretty cool, and nice and mythic.  Think about how we're always keeping track of who's looking at the medusa's eyes and imagine how you'd track who is standing in the hag's shadow during a combat.  What happens when the light sources shift because somebody cast a spell?

Spider-Man 2099.   I enjoy the 2099 comics a good bit, but there isn't much to steal from this one as Spider-Man meets the future version of the Vulture, who is a flying cannibal who sides with the city's downtrodden.  There's a whole "for the people" speech that garners a little sympathy, but then he eats a dude.

LOOT: Making an otherwise middle-of-the-road menace into an Actual Cannibal might be just the thing to turn a C-level villain into a B+.  Probably works best for a villain who you wouldn't think is already a man-eater (ie, not an orc or an ogre).  Maybe that evil wizard likes to chew on folks, or eat their brains, because he believes it'll make him smarter.  (What if he's right and eating a hundred prepared brains of INT 15+ will give you a point of INT?  Metaphysics have consequences!)  Or perhaps not a villain - suppose the PCs have an allied fey elf person who occasionally helps them, and then one encounter they come to learn that this unseelie bastard has a very different moral code than they do when it comes to what's consumable.  Keep your aliens weird, people; and don't trust elves, since given half a chance they'll eat a baby.

So a mixed bag of ideas there, but you tell me - were they worth three dollars?