Never leave a Santicore behind!  Sometimes Santicore requests or submissions fall between the cracks in the floor and must be dug out and dusted off, or replaced at the last minute.  Or, as in this case, a good while after the fact.  But the mighty Santicore of course desires all his supplicants to be happy at the end of the day, and late is far better than never!

THE REQUEST:  A write-up of that old store down the dark alley, the one with the books filled with apocrypha and the elixirs of mysterious makes.  And of course a halfling should run the place!

In response, I've cobbled together some extant tables and a new one and put them together in one post with a short write-up of just such a dubious shop, all systemless.  Hopefully this will suit the requester's needs - and perhaps yours as well.

TABLES TO USE TO STOCK THIS SHOP ON THE FLY
1.  The Wampus Country d100 potions table, or any other potion-description table you like
2.  This shiny new Big Elixir Table which will generate components (of the "eye of newt" variety), disease to be cured, and method of preparation
3. I strongly suggest you supplement the above liberally with Ian McDougall's Snake Oil table.  Ian blogs over at Benign Brown Beast and you should check his stuff out.
4. If you need tomes and other written materials, consult d100 Arcane Books and d100 Treasure Maps.

At the end of the street in a ramshackle neighborhood sits the plain and fading storefront; only a small scrawled sign in the smoky window - House of Enigmas Closed At Mealtimes - betrays the nature of what lies within.

The interior of the shop is cramped and dark, with scattered lonely candles sitting here and there upon dusty stacks of books which seem to cover every horizontal surface, as though they sprung up there organically like some kind of moss.  Upon myriad shelves sit phials and beakers, repurposed hatboxes, small coffers, and rusty tins labelled with titles like Doctor Orpheon's Tell-Tale Witch-Burning Powder.

The proprietor and sole employee will gladly let visitors poke about before he approaches them, typically startling customers by stepping out from behind a tall stack of books on the floor.  He is the self-titled "Maestro of the Bizarre", Marlborough Fenwater - a portly halfling with slicked-back hair and a probably-fake goatee who minces about in black clothing and natters on about "protecting oneself from invasion of the nethers" (although whether he's talking about aliens from a grotesque nightmare realm, or venereal diseases, one can never surely say).  He sometimes smokes a meerschaum pipe carved to look like a devil's head, and his clothing often smells of the clove-and-vanilla pipeweed blend he favors.

Marlborough is gregarious enough and will happily banter with customers and attempt to lead them to just what they need, even if it always seems that what they really need is conveniently the same thing of which Marlborough has an entire box full.  He is quick to diagnose seeming maladies and prescribe powders, elixirs, and marginally-occult self-help books which will "clear that up in a right jiffy", whether the issue is baldness, excessive flatulence, or possession by pain demons.  Marlborough claims to have occasional contact with "evil spirits" and the like, and enjoys pretending to be edgy, transgressive, and possibly in league with diabolic forces. The halfling himself is not a spellcaster of any sort, but he does claim to "know people" of any given specialty; he will name-drop wizards and witches from whom he received a rare product or a choice piece of advice.  Mostly he's full of crap, but there's a reasonable chance he has had dealings with some of the other local movers and shakers - he may even owe them money...

He does have a ridiculous amount of stock, however, and there is a 1% chance that should customers be looking for something specific - a given book on magic, a certain kind of potion - that he will indeed have just the thing somewhere in the shop.  How long it will take him to locate the item in question is a rather separate matter.  Marlborough keeps a wide variety of books and scrolls, elixirs and potions, and occasional other trinkets.  Some of them are even genuinely magical.  Marlborough will buy and sell strange items, and may prove a useful contact when it comes to monetizing less-obvious treasure.  ("The severed hand of a ghoul, you say?  I'll give you ten gold for it!")   Also living in the shop is a mangy old tomcat, usually asleep - the sort of cat that just hates people and refuses to be petted.  Marlborough likes people to think that this cat is his hell-infused familiar.

(I'm thinking Black Books mixed with Sir Simon from "Pit of Ultimate Darkness" on Kids In The Hall, honestly...with some Oddities mixed in)

RUMORS/FACTOIDS REGARDING THE HOUSE OF ENIGMAS

1.  Marlborough keeps his shop money in a cigar box on one of the shelves; it has a pretty red label on the outside, and a poisonous centipede-thing on the inside...
2. When tipsy, Marlborough will claim that his surname isn't really Fenwater.  Depending on his mood, he will either claim kinship with the Duckworths (a fairly well-known clan of halfling merchants and explorers) or the Brackenboroughs (halfling royalty!).
3. The House of Enigmas used to be run by a kindly old woman everyone knew as Aunt Edna.  One day she disappeared, and Marlborough was the new proprietor.
4. That halfling is a demon in disguise, I'm telling you!
5. Don't trust anything he says.  I bought a potion that was supposed to give me long, luxurious hair.  Boy, did it ever - by turning me into a woman...
6. The "Maestro of the Bizarre" owes a significant amount of money to the local crime syndicate; several months ago, Marlborough got his hands on a talking-board that he really thought could predict the outcome of horse-races, if he could just figure out which race it was telling him to bet on.  To this day he swears the planchette was giving good advice, but not for that day's races...maybe races ten or twenty years in the future. 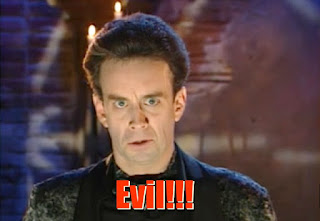